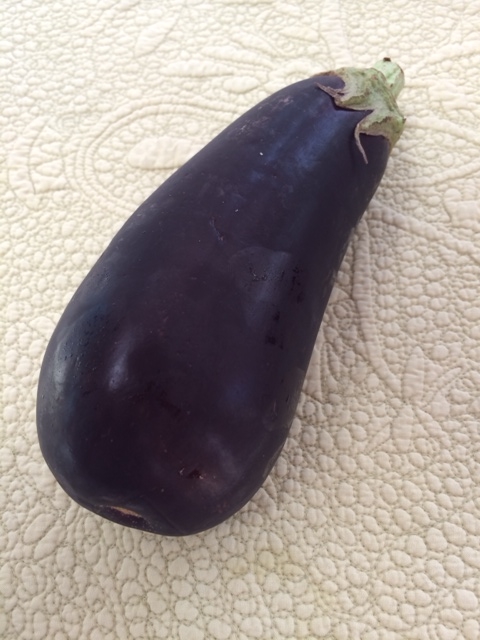 Selecting:  Choose an eggplant with glossy skin.  You want the eggplant to be firm, with no soft spots or bruises, and feel heavy for its size.

Many people find the taste of eggplant bitter, and some say that female eggplants are more bitter than the males.  Eggplant is, in fact, a naturally bitter vegetable because the seeds are bitter.  Female eggplants have more seeds than their male counterparts (makes sense, right?).  I couldn’t find good pictures to help distinguish between the two, but it seems that the “bellybutton” on the bottom of a male eggplant is rounder and larger, and on a female, it is long and narrow.

Preparing:  Conventional wisdom sometimes recommends salting (or “sweating”) the cut-up eggplant before cooking to reduce bitterness.  While this step will result in a silkier texture, it does not actually change the flavor.  The salt draws out water, not flavor, preventing it from absorbing as much oil if you fry it.

To “sweat” your eggplant, cut it up into the shapes you plan to cook (slices or cubes).  Place the eggplant in a colander, and sprinkle with salt.  Let the salted eggplant sit for about 30 minutes, then rinse and dry before continuing with your recipe.

The peel of the eggplant is edible, though on larger eggplants, you might prefer to peel the skin if it’s tough.

Storing:  Eggplants don’t really like to be cold, being, technically, a tropical fruit.  The ideal storage temperature is 50F, but that’s not easy to achieve in a typical home kitchen.  The counter is too hot, and the refrigerator too cold.  That said, an eggplant can be stored on the counter for a day or twoif you are planning to use it in that window of time.  If not, store in a plastic bag in the crisper drawer of the refrigerator for up to a week.  Eggplants don’t like to be bruised; they will go bad sooner in that condition, so if it doesn’t fit easily in the drawer, it’s better to store the eggplant on a shelf.

Cut raw eggplants don’t store well either, so you want to cook the whole vegetable.

Freezing:  You can blanch and freeze eggplant to use later.  Bring a pot of water to a boil, and prepare an ice-bath.  Cut into slices or 1-inch chunks.  Place eggplant into boiling water for 3 minutes.  Remove with a slotted spoon and plunge into the ice bath to stop the cooking.  Do this in batches as needed.  Remove the cooled eggplant from the ice bath and dry off.  You will want to separate eggplant slices from each other with wax paper or plastic wrap before placing in freezer bags.  Chunks can just be frozen as is.

A recipe inspired by reading of Love in the Time of Cholera by Gabriel Garcia Marquez.

Poke eggplant 2-3 times with a knife. Roast eggplant either in medium hot grill with indirect heat method or in your oven at about 375oF for 40–60 minutes depending on the size and variety of eggplant that you have. The eggplant need to roast until the skin is papery looking and the flesh very soft. I like to use the long thin eggplant without seeds. Let the eggplant cool. Peel off papery skin. Tear or slice roasted eggplant flesh into long strips, about ¼-½ inch wide.

Save about 2 tbsp of the olive oil for later. Pour remaining oil in to a large skillet. Drop in garlic. Heat to medium heat on stovetop, or outside heat source, and cook for about 1 minute. Add eggplant strips. Let the eggplant fry. After about 5 minutes when the flesh starts to be a bit crunchy and brown, flip strips with a spatula and sprinkle chopped jalapeno on top. Let eggplant cook on the other side until brown and crunchy bits start to form. You may need to vigorously scrape the skillet with spatula or adjust heat if things get too crunchy and start to smell more burnt than aromatic. This will depend on the skillet and heat source… The goal is to get the eggplant soft and caramelized without burning it. Remove from heat.

Sprinkle cumin, coriander, salt and pepper to taste and fold spices in while scrapping bottom of pan. Transfer cooked eggplant to a serving dish, sprinkle parsley and cheese on top.  Drizzle reserved olive oil on top and sprinkle a few salt flakes here and there. Enjoy!

“The harmony they had longed for reached its culmination when they least expected it, at a gala dinner at which a delicious food was served that Fermina Daza could not identify. She began with a good portion, but she liked it so much that she took another of the same size, and she was lamenting the fact that urbane etiquette did not permit her to help herself to a third, when she learned that she had just eaten, with unsuspected pleasure, two heaping plates of pureed eggplant. She accepted defeat with good grace, and from that time on, eggplant in all its forms was served at the villa in La Manga with almost as much frequency at the Palace of Casalduero, and it was enjoyed so much by everyone Dr. Juvenal Urbino would lighten the idle hours of his old age by insisting that he wanted to have another daughter so that he could give her the best-loved word in the house as a name: Eggplant Urbino.”
Excerpted from the novel, Love in the Time of Cholera,

Tina Jaillet is a Lexington resident and LexFarm founding member. She has boundless interests yet sharing foods with loved ones is a daily pursuit. Tina volunteers for the LexFarm educational committee.

Beyond eggplant parmesan, cooking up eggplant provides a ticket to cuisines around the world.

For more ideas, check out these round-ups from Melissa Clark, Real Simple, Fine Cooking, and Saveur.